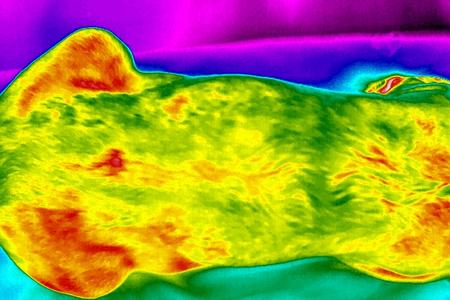 The radiographs revealed severe bridging spondylosis from the caudal thoracic spine to the sacrum. There was also evidence of severe Lumbosacral disease with degeneration and mineralization of the Lumbosacral disc. The hips had moderate osteoarthritis (OA)

Digital thermal imaging revealed an increased heat signal from the lumbar spine and lumbosacral junction consistent with pain, inflammation and muscle spasm in this region.

A diagnosis of severe thoraco-lumbar spondylosis with severe Lumbosacral disc disease and moderate hip OA was made on physical and radiographic findings.

Trudy was started on NSAID, Gabapentin and Tramadol medications. She was put on a calorie restricted prescription diet (PVD OM) and restricted exercise. A course of laser therapy was also started at this time. The hips and LS regions were clipped and a Companion CTX class IV laser therapy unit was used to treated these areas. Trudy had six treatments over two weeks at a dose of 3 joules/cm3 for the hips and 15 Joules/cm3 for the LS region.

Trudy initially responded to treatment with reduced pain and increased mobility but in June 2016 she was becoming increasingly weak on her hind legs and was becoming ataxic and uncoordinated. The proprioceptive deficits in both hind limbs were increasing and she was scuffing the nails of digits 3 and 4 when she was walking. This video shows her ataxia and paraparesis at this time:

She was admitted to the hospital for stem cell therapy to treat her spinal and disc degeneration and hip OA. She was pre-medicated with Acepromazine and Morphine and anaesthesia was induced with Propofol. She was maintained on gaseous anaesthesia (Sevofluorane). 60 ml of blood was drawn from the jugular vein and used to produce 4 ml of PRP with a platelet concentrating factor of 8.8 and virtual elimination of red blood cells and neutrophils (Post spin RBCC 0.28 x 1012/L, Neutrophils 1.27 x 109/L, Lymphocytes 9.83 x 109/L). PRP was produced using the Companion CRT system.

The left hip was clipped and surgically prepared and 30 ml of bone marrow was obtained from the femur using the Companion BMAC collection kit. The bone marrow was used to produce 3 ml of BMAC. 0.7 ml of BMAC was combined with equal volumes of PRP and injected into the epidural space at the LS junction. A further two lots of 0.7 ml BMAC and PRP was injected into both hips. The remaining 0.9ml of BMAC was placed into a sterile container and shipped to Cell Therapy Sciences Ltd (CTSL) by overnight courier. Approximately 20g of fat was harvested from the falciform ligament via a midline laparotomy. The adipose tissue was placed in sterile saline and was shipped along with the BMAC for cell culture.

In July 2016 Trudy was given 50 million ADMSCs (1 million cells/Kg bodyweight) by slow intravenous infusion and she was then sedated and 10 million BMDMSCs were implanted into the epidural space at the LS junction. A course of laser therapy was started immediately following implantation. This video shows Trudy at two weeks following her second treatment (six weeks from the first treatment):

At two weeks following her second treatment, Trudy was much brighter in herself and showed no pain on palpation of her spine. She was still mildly ataxic but had regained strength and co-ordination in her hind Limbs. She was still receiving a NSAID (Mavacoxib 2 mg/kg monthly) but the Gabapentin and Tramadol had been reduced and stopped without any deterioration in her pain or activity. There was still some proprioceptive delay in both hind limbs but this had improved dramatically over the last six weeks.

By three months following stem cell treatment Trudy was exercising normally again and was not showing any signs of pain or lameness. Her placing reflexes were normal and she was no longer scuffing her nails during ambulation. Her NSAID was stopped at this time.

This is a video of her after a three mile walk up into the hills and back:

Five months after her initial treatment Trudy continued to improve she had gained muscle mass in both pelvic limbs (Gulick tape measurements of left and right thigh circumference had increased by 2.8 cm and 3 cm respectively from before treatment) and was not receiving any medication. She was found to be exercising normally without lameness or stiffness. Stance analysis revealed a normal weight distribution with 29% on the left fore, 30% right fore, and 21% and 20% on the left and right pelvic limbs respectively. Digital thermal imaging showed a more normal thermal image of the lumbar spine:

Trudy presented at Greenside Veterinary Practice Ltd, Scotland, UK, in May 2016 due to unwillingness to exercise, difficulty climbing stairs, inability to jump, and lethargy.

On physical examination, Trudy was found to be overweight (Body condition score 3/5) and had a marked loss of lumbar spine flexibility with areas of pain on palpation. There was an exaggerated cutaneous trunci reflex at the thoracolumbar and lumbosacral junctions on palpation. Neurological examination revealed mild proprioceptive deficits in both hind limbs during the paw righting reflex.  The patella reflex was normal. There was reduced muscle mass in both hind legs and pain on caudal extension of both hips with reduced range of motion. Stance analysis with the Companion stance Analyser revealed increased weight bearing on the thoracic limbs and a reduction in weight bearing on the pelvic limbs from normal. A normal dog would bear 60% of its weight on the thoracic limbs (30% each) and 40% on its pelvic limbs (20% each). Trudy’s values were left fore 34%, right fore 33%, Left hind 16% and Right hind 17%.

Trudy was admitted for further investigation including radiography and Digital thermal imaging. Her radiographs can be seen below:

Repeat radiographs showed a clearer lumbosacral disk with a reduction of ventral spondylosis at L6-L7 and L7-S1. 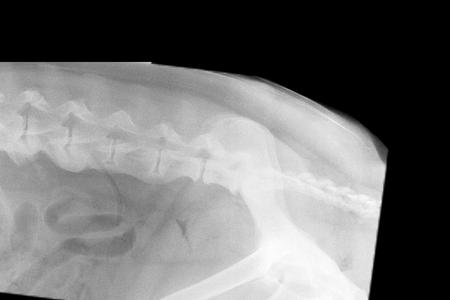 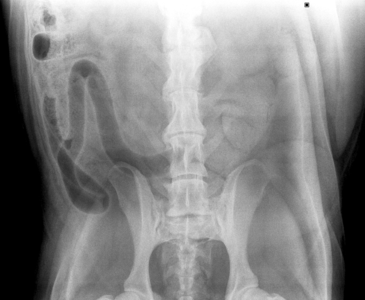 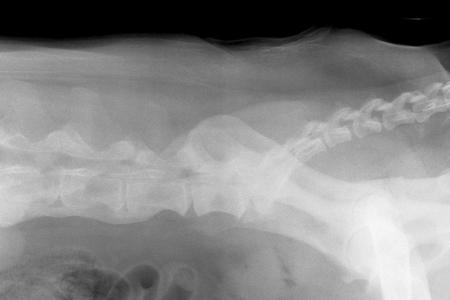 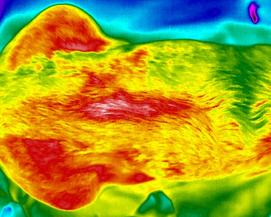 Our Location
Our Hours 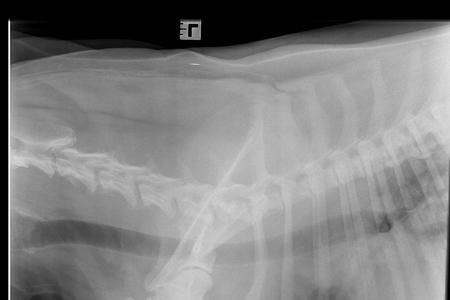 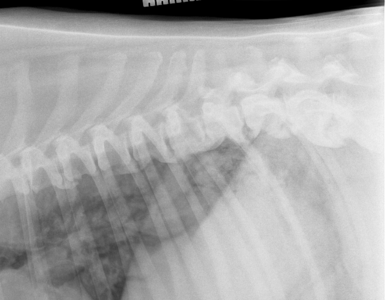 A case of Lumbosacral disease and hip osteoarthritis treated with regenerative medicine.

A repeat epidural treatment of stem cells was performed at this time to “top up” the regenerative process. She was sedated and approximately 10 million ADMSCs were implanted into the epidural space at the lumbosacral junction. Post implantation laser therapy was also performed. The following video shows Trudy enjoying life six months after initial treatment with stem cell therapy.

A sample of Trudy’s adipose derived and bone marrow derived stem cells have been cryogenically frozen so that they can be used to culture more cells in the future (without having to perform a repeat harvest) in case she needs further treatments.